The Changzhou Culture Plaza enriches cultural life in the Chinese megacity of Changzhou. But the architectural realisation of this extraordinary building is also a feat.

Changzhou is located on the east coast of China, 180 kilometres and only a few hours' drive from Shanghai. The city has 5.2 million inhabitants and is one of the most important industrial metropolises in the Yangtze Delta region.

In Changzhou, the city centre is growing and with it the cultural offerings. In 2020, the Changzhou Culture Plaza was built on an area of 17 hectares, which is equivalent to more than 23 football fields. Together with the neighbouring city hall and the Changzhou Grand Theatre to the north, the cultural centre forms the new centre of the metropolis.

The cultural building is the result of an international competition launched in 2012, in which the design by the German architects Gerkan, Marg and Partners (gmp for short) won out. Six identical, freestanding structures were created, each 70 x 70 metres long and hollowed out on two sides. Like mushrooms, they rise 50 metres into the air.

The architects built the building modules so that together they form a single unit. But from every perspective, their rounded façades look different. A river meanders in an artificial channel through the park and between the building sections. A staircase creates a connection to the shops and the nearby underground station in the basement.

A covered urban space for public events has been created in the centre of the building modules. But cultural life also takes place inside. All six building modules have their own entrance. There is a library, a hotel, museums and art galleries as well as offices and commercial space.

A play of light on the façades

What is also special about this project is the façade. The rectangular building envelope consists of a natural stone façade, and aluminium slats have been installed horizontally. Together they create a sunshade. A glass façade adorns the curved sides of the building. Stone and glass surfaces form a rhythmic, colourful contrast in daylight.

The buildings consist of steel structures. The top floors are also used for exhibitions. The Geberit Pluvia drainage system is installed on the roof, which covers a total of 28 000 square metres at a height of 50 metres. 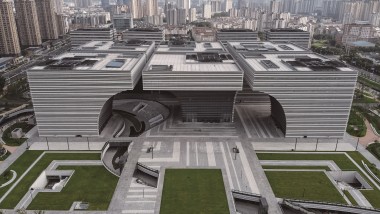 The Geberit Pluvia drainage system was installed on the total roof area of 28 000 square metres. 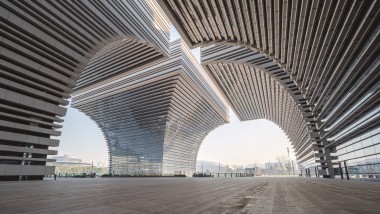 Thanks to a sophisticated steel structure, the special shape of the building modules is possible. 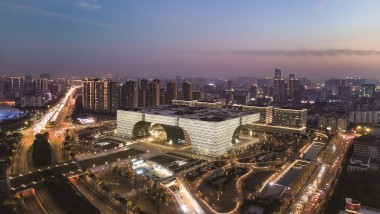 The façades can be illuminated at night.
Share this videos